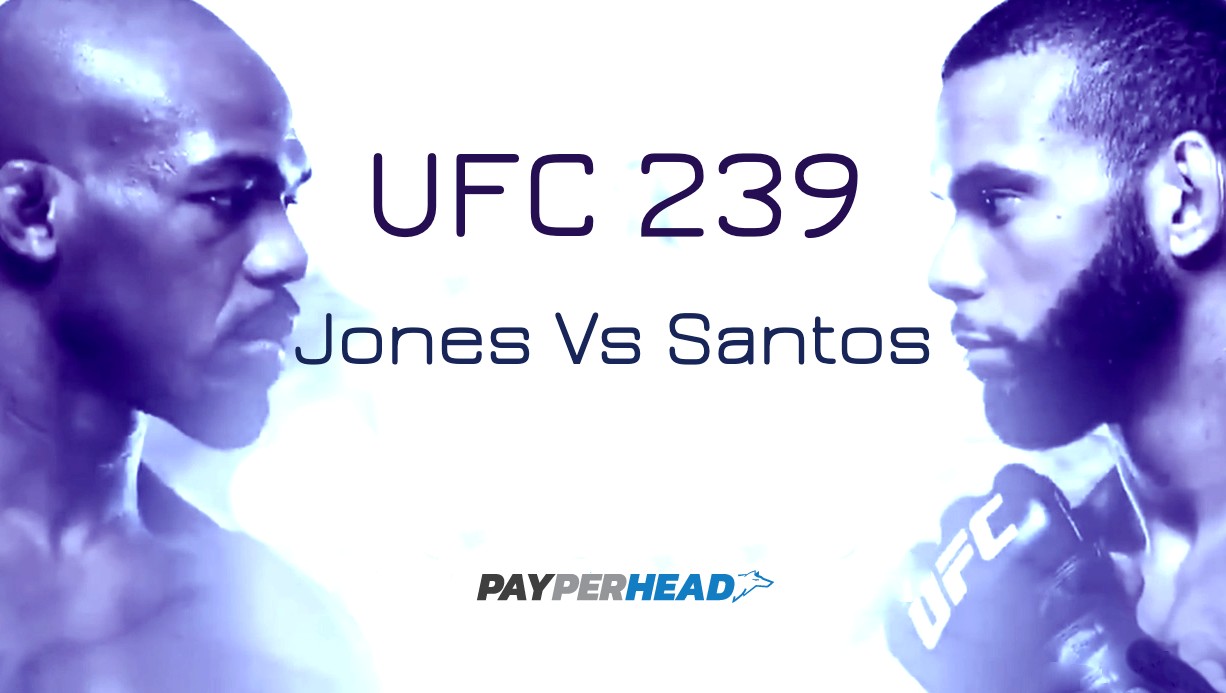 UFC239 International Fight Week: Jones and Santos square off for the main event.

July takes the UFC back to Las Vegas for this year’s International Fight Week in UFC239, bringing fans together to celebrate combat sports and culminating by one of the best fight cards this year.

Jon Jones & Thiago Santos will square off for the light heavyweight championship in the main event. While two-division champ Amanda Nunes will put her bantamweight title on the line against veteran and former champ Holly Holm.

In the co-main event, two-division champion Amanda Nunes will be putting her bantamweight title on the line against former champion Holly Holm.  With future hall of famers Junior Dos Santos, Diego Sanchez and Luke Rockhold also included on the marquee, there will be a ton of betting action for UFC239 and we’re here to keep you ahead of the pack.

A great card needs a great fight to kick it off and this one has a chance to lock down fight of the night at UFC239 early.

Sanchez is a true legend at this point in his career with his superhuman mental toughness paving the road after his win during the first season of The Ultimate fighter.  While his glory days are behind him, he has plenty enough left in the tank to make a run at an upset win.

Michael Chiesa, also a TUF winner, is coming into this fight as a 3/1 favorite despite a low level of cred attached to his name.  Perhaps you are even thinking, the name sounds familiar but I can’t place any of his fights.  This is likely due to his most famous UFC moment thus far was his decision to actually sue Conor McGregor for assault, battery and intentional infliction of emotional distress after “dolly-gate.”

Despite this questionable choice, this guy can fight.  He is a very dangerous submission fighter who even tapped Carlos Condit with a kimura late last year.  A major concern is his standing power with not a single standing knockout on his resume, he really even hasn’t come close.

Ok well then Sanchez just has to be careful not to get submitted then, lucky for him he has never been tapped in his 40 fight career, a tall mountain for Chiesa to climb. That alone makes for a mouth watering contest. Add in the fact that ‘Nightmare’ has been involved in more fight of the night bouts than anyone in MMA, we got a recipe for a slobberknocker.

So let’s review.  Chiesa has shown zero ability to knock anybody out in the UFC and is completely reliant on submitting or outscoring his opponents. Sanchez has some of the best ground defense the sport has ever seen, endurance for days and a real ‘no quit’ mentality.  With Diego’s odds hovering at 3/1 this is a no brainer underdog bet to start your night off in the black.

Next up on the night is the much anticipated debut of Luke Rockhold in the light-heavyweight division.  Seems the part time model at 34-years-old just got tired of cutting so much weight only to knocked out by the likes of Michael Bisping and Yoel Romero.  He should be much more comfortable at 205 and could really spark a career resurgence for former BJJ World Champion. One thing of note, Rockhold has fought just 3 times since June of 2016 going 1-2.  This can be viewed one of two ways, the negative outlooks would be to worry of ring rust while the positive thinkers will look at the limited mileage on his 34 year old body. As a 34-year-old person I can say the extra rest is a positive and a veteran like Luke left ring rust in his rearview many years ago.

Blachowicz has a lot of work to do in this UFC239 bout is no slouch, but I believe he should be a steeper underdog in this bout.  The former KSW world champion is 4-1 over his last 5 fights with the only blemish coming from Thiago Santos, no shame there.  The problems arise when you start to look at his fight schedule compared to Luke.  Over the same time that Rockhold fought a total of 3 times, ‘The Prince’ has racked up 9 fights in the UFC.  This fight also will be the first time the Polish stud is actually the smaller opponent with Rockhold casting an intimidating shadow at 6’3” and 205.  The biggest cause for concern is Blachoqicz’s power is not sufficient enough to keep Luke on his back foot.

I feel Rockhold will be very confident in his first bout at 205, especially considering the prize for winning, which could be a title shot against Jon Jones.  Taking into account that Luke has only ever lost via KO/TKO and Jan’s sub-average power I feel confident in the gringo, and at very favorable -175 odds.

The last time we saw Jorge Masvidal he stepped up vs Darren Till in London earlier in the year and certainly made a statement against the hometown favorite.  That statement came via a well timed bomb which busted the bunker known as Darren Till’s jaw, goodnight London.

Ben Askren also landed a big upset with in 2019 already when he bulldog choked out Robbie Lawler in the first round.  Not bad for a UFC debut.  Now there was a lot of criticism surrounding Herb Dean’s decision to call the fight due to the fact that Robbie had not tapped and was still conscious when the bell rang. But the decision was finalized and Askren takes on small step toward a welterweight title fight. Masvidal is a killer in the octagon, very determined and highly skilled.  Askren is a two promotion world champion with straps from both Bellator and ONE FC hanging in his trophy room. He also seems to have a real joy for just beating the shit out of people, no other way to put it, and that is something you just can’t teach.  This will be his hardest test to date at UFC239.

The deciding factor for me is Masvidal’s tremendous boxing skills and Askrens lack of experience facing such a foe. Expect a good fight until Masvidal catches Askren at some point and hands the ‘Funky’ his first UFC loss.

At this point in her career, coming off a TKO of Cris Cyborg, I believe it’s safe to say that Amanda Nunes is the best female fighter in the world right now, maybe ever. She left UFC 232 as the performance of the night winner and the first ever woman 2 division champion. She heads to vegas, and back to her proper weight class, to defend her Bantamweight title against the only challenger left in the division: Holly Holm.

While Nunes has etched her name among the best of all time in MMA, man or woman, Holm’s career about derailed after her shocking win versus Ronda Rousey in 2015. After that legendary fight Holm held a 10-0 record and a feared title holder.  She followed that up by immediately losing her belt to Miesha Tate just 4 months later and lost 2 more fights on the trot after that, including the aforementioned Cyborg whom Nunes beat in just 53 seconds. Her current record stands now at 12-4 and while I’m surprised her career survived the last 4 years, she is hugely talented and certainly deserves a shot at the title.

This one is probably the most straightforward to predict on the night as all indications are that Nunes will successfully defend her belt at UFC239. Holmes has been a favorite in the market despite being an underdog in the odds at +250.  This is likely due to her skill level as compared to her recent performance, and of course her shocking upset of Rousey has made her a popular underdog bet over the years. While I see Nunes overcoming some stylistic matchup humps, there isn’t much value on that side of the coin for bettors.  So expect Nunes to retain but don’t feel stupid if you sprinkle a few bucks on Holm to shock the world again, I am.

Whenever Jones (24-1) is fighting it’s a good bet to expect a bit of drama in the evening. Though widely considered the best natural talent in MMA history, his career has been mired with failed drug tests, suspensions and arrests.  But none of that matters once the door to the octagon is closed, except the PEDs of course, and at the end of the day Jon Jones is the best fighter in the UFC.

Thiago Santos (21-6) hits Las Vegas for UFC239 as the biggest underdog of his career at +450.  While the Sledgehammer has enough power and skill to keep Jones honest, the odds of him actually pulling off a win should probably be closer to 6/1.  I think Santos is benefiting from some recency bias as The Brazilian is 3-0 since moving up to the UFC’s light heavyweight division, with TKO/KO wins over Eryk Anders, Jimi Manuwa, and Jan Błachowicz.  But upon closer inspection I see a legit terrifying fighter, who is fighting tired and blown-up, not qualities that win you a title.

I don’t like to use the term ‘lock’ but at this point in his career, at just 30 years old, Jon Jones look nigh on unbeatable. He has dominated just about every minute he has been inside the octagon and has shown a lot of maturing over the last 2 years. While Santos deserves this fight, he does not deserve the ass kicking he is going to suffer through.

That rounds out our coverage of UFC239 and I really believe this to be one of the best cards we will see until the calendar turns to 2020.  This is exactly the kind of events which provide a great chance for agents to push new sports to clients in the slow season of US sports betting.  There are UFC events each week all year long to wager on, so what are you waiting for, get educated on MMA and start getting paid today. 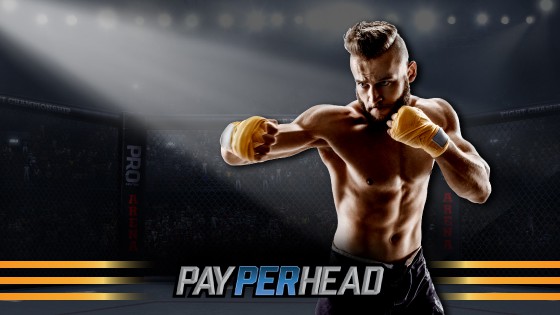 An Early Look Into Floyd Mayweather Vs Tenshin (With Odds!)

Floyd Mayweather Vs Tenshin fight odds that will help you gain a profit The great...