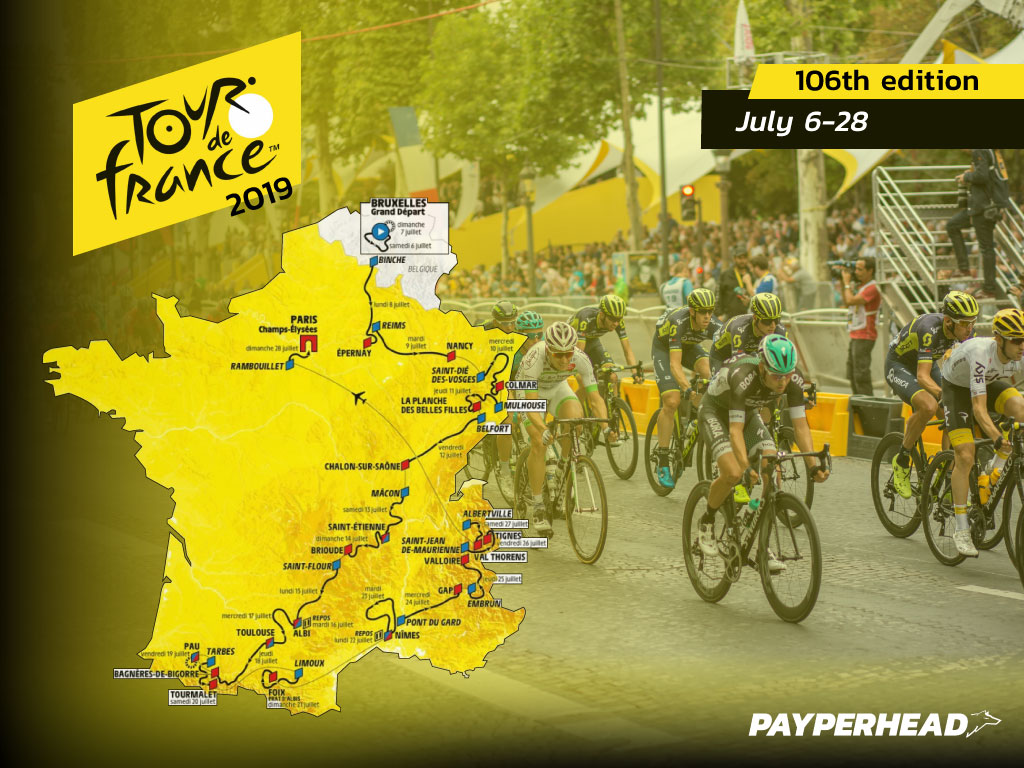 One of the more grueling events in international sport kicks off on Saturday with the first leg of the 2019 Tour de France in Belgium.  Running for 22 straight days zig zagging through Europe and culminating on the Champs-Élysées in Paris after traversing France.

The 2019 Tour de France, running from July 6th to the 28th will see riders traverse a road-trek with a total distance of 3,460km (2150mi).  State one goes live in Brussels, Belgium in celebration of the 50th anniversary of Eddy Meckx’s historic 5-peat at La Grande Boucle.  The event heads briskly toward the French border, passing by the Vosges and the Massif Central, along the way we have a hillclimb to the peak of the Tourmalet and time trials at Pau.  That’s just part of stage.

The Tour will hit the steep mountain of Mur de Péguère along with a series of Alpine stages including Col d’Izoard, the Col du Galibier, and Col d’Iseran, which at 2,770m is the highest paved mountain pass in the entirety of Europe.

All in all the 2019 Tour de France features 30 climbs, 5 mountain finishes and a scant 54 minutes of time trial racing.  With 3 of the 5 mountain finishes sitting north of 2000m, race director Christian Prudhomme has tagged this as the “highest Tour in history.”

Aggressive racing will be rewarded more this year with a total of 8 sets of bonus systems placed strategically throughout the climbs along with more medium races making maintaining a lead more difficult.

With two of the top racers in the world missing the event this year, 4 time tour winner Chris Froome and Tom Dumoulin, the betting field has really opened up.  The 2019 Tour de France presents a rare amount of value for such a notoriously tough event to handicap.  Froome was taken down with a vicious accident during the pre-race of the 4th stage of the Critérium du Dauphiné while Dumoulin suffered a knee injury at the Giro d’Italia earlier this season.

This leaves the betting leaderboard we see below.

First thing is first, we need to start at the top and run down the list of top contenders.  As mentioned above with Froome and Dumoulin sidelined we have some fresh faces in our top-5 to win the Tour.

Geraint Thomas +200
The reigning Tour de France Champion and 3-time world champ rides into Brussels as the favorite to win in 2019 at 2/1 with teammate Froome ceding his top billing for this year. Thomas is obviously the safest bet with his two biggest competitors out and coming off a 2018 win.  A slight concern when we consider the race directors proclamation about this being the ‘highest tour in history’ as Geraint will have trouble keeping pace with the apex climbers. Expect a likely podium finish and for him to sporting yellow at some point over the next 3 weeks.

Egan Bernal +250
Team Ineos goes 1 and 2 in the odds with Thomas’ teammate Bernal running right behind his mate on the leaderboard. The 22-year old Colobmian native took top spot at the Tour de Suisse, the Paris-Nice, took a third place trophy home at the Volta a Catalunya and just missed the podium at the Tour Colombia.  After his recent win in Switzerland his odds have shot through the roof, perhaps a little too high even.  I believe this is a case of recency bias, and while Bernal is a top rider for sure, a +250 line seems a bit generous even with the diminished field.  I’m expecting a lot from Bernal, especially in years to come with Team Ineos behind him, but the value just isn’t quite there after the Tour de Suisse win to feel good about betting on him.

Jakob Fuglsang +500
Despite the fact that Fuglsang, the 34 year old swiss born veteran, has never finished in the top-10 of a Grand Tour he still finds himself near the top of this list of contenders.  Perhaps a bit more of the recency bias, his odds shot up after a huge win at the Criterium du Dauphiné, some experts say this race is the biggest predictor of success at the Tour de France.  In fact at his age Jakob is having somewhat of a career resurgence after taking wins at the Liege-Bastogne-Liege and the Ruta del Sol and podium finishes at Tirreno-Adriatico, Strade Bianche, Fleche Wallonne, and Amstel Gold.  With the Tour more wide open than it has been in years, you could do a lot worse than taking a hot rider at 5/1.

Adam Yates +1200
Is success at the Tour de France genetic?  I bet Mr Yates hopes so as he is the twin brother Simon Yates, podium finisher at the 2016 Tour de France.  But Adam has been the brother to watch this year with a 2nd place finish at the Volta a Catalunya and Tirreno-Adriatico to go along with top-5 medals at the Liege-Bastogne-Liege, Vuelta a Andalucia and Tour of the Basque Country.

Porte is a tough nut to crack, especially when betting the 2019 Tour de France.  He is either wildly under or overvalued year to year, its just up to us to figure which is which any given July.  A reckless but exciting racer, if he manages not to crash out he will be in the mix to win it all, no doubt about it. Sounds easy right?  Well maybe not.  Richie Porter has an accident record much like that one uncle of yours who just refuses to give up his drivers license. In 2018 he closed among the favorites and crashed on stage 9, breaking his collarbone along with the hearts of his backers. That was the 3rd DNF due to crashing over his last 6 attempts to win a Grand Tour event. If you can stand the butt puckering stress of watching him race with money on the line go right ahead, I sure am.

Who Rides Into Paris Wearing Yellow?

With Froome and Dumoulin watching on TV this year, and the odds in a bit of disarray, this becomes much more of a crap shoot between the top-5 listed above. Thomas remains as the only rider still racing of the top-3 favorites when the odds broke, and for good reason.  He is riding strong, has a great team behind him and has the mental toughness to go wire to wire.  That said, Adam Yates is also hot right now, and at just 26 years old he has father time on his side as well, who as we all know is undefeated with no ties.  Porter will be getting a sprinke of units from me but I can’t bring myself to make him my main bet in 2019.  Fool me once shame on you, fool me 5 times… we gonna have a problem.

As of this writing I really like Jakob Fuglang based on his recent work on the bike and his win at the Criterium du Dauphiné, who am I to argue with the Cycling experts after all.  At +500 it leaves a lot to be happy about heading into next weekend.

Guys if you aren’t already offering lines on these types of huge international events, its time to reassess how committed you are to making money.  While not the most talked about event in the USA, the Tour de France is a true powerhouse in the industry and agents should treat it as such.

At PayPerHead we have recently spent a lot of time updating and optimizing our mobile user experience and what better way to take if for a test drive than offering daily lines on the 2019 Tour de France. Not only is this an event which lasts the better part of the month, but also an opportunity to introduce something new to your clients.

As a Pay Per Head agent you have access not only to out top-tier sportsbook software but also a racebook, 24/7 customer support, your own website and our Agent Payment System which allows the collection of payouts on the fly. 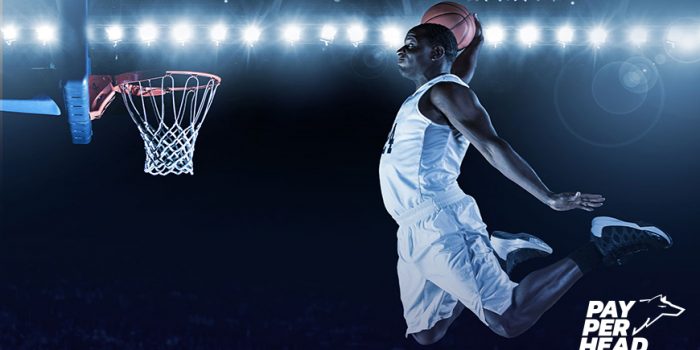 NBA Viewership In Canada Skyrockets, Causing More Canadian's To Bet On NBA And Create Their... 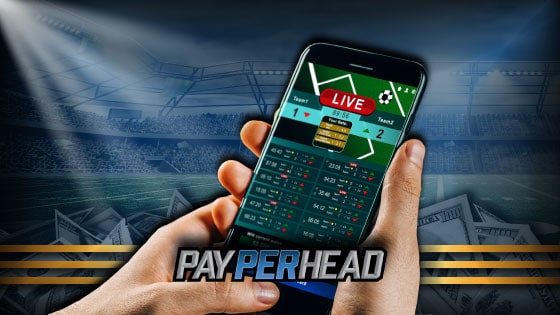 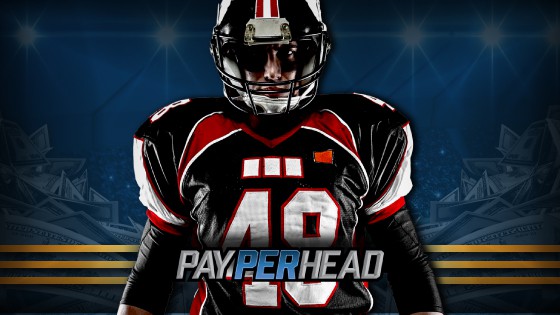 PayPerHead, an industry-leading sportsbook software company, is anticipating unprecedented profit and growth throughout